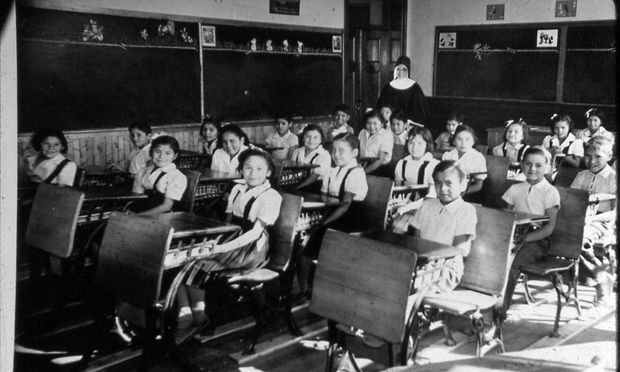 Geeze, if my nephews ever said, “I’m sorry,” the way Harper delivered the Indian Residential Schools apology speech, I would have said, “You didn’t mean it. You better think about what you did. Now, say it again like you mean it.”

This was an opportunity for Harper to make history, to finally do something in his term as Prime Minister. Really what has he done? Has he committed to doing anything?

Did this apology demonstrate the sorrow and or commit to change?

An apology has three parts. First acknowledging the wrong, second the feeling in the apology, and third, what happens next. This apology has been long overdue. Survivors waited their lifetime to hear it – 60, 70, and even periods as short as 10 years. It’s been generations. And, it’s been no time since the last Indian Residential School in Canada, White Calf Collegiate, closed in 1998. Even 10 years can seem like a life time.

This apology had been proposed years before. After the 1996 Royal Commission on Aboriginal Peoples report was released, I heard one of its authors talk about the content. This person indicated that the writers wanted to include the recommendation that an apology be given to Indian Residential School Survivors, but Canada was advised not to. There were too many legal implications from saying “I’m sorry.” This writer said, “Just saying the words “I’m sorry” means a lot.”

What of the humanitarian and social justice reasons, and the matter of just doing the right thing?

This carefully crafted speech had to take into account the numerous offenses and policies of centuries of efforts to annihilate, assimilate, destroy and eliminate the Indian problem. Canada’s genocide. Canada’s apartheid.

There were several respectable phrases within the apology – “It was wrong”, and “I apologize” – to account for the policies and actions of former governments, churches, and decision-makers that, perhaps, Harper felt he should not have to apologize for – after all, it was not him, or his party that created the policy. Should he or anyone else have to apologize for the Indian Residential Schools, for something they did not do?

I recall a story my mom told me of how the nuns punished her because she would not apologize for something she vehemently said, “I didn’t do it.” This is not the same as Canada’s need to apologize for the schools, and as well for Canadians to share in the apology and to understand why it is important to do, and to realize that for the 150 years of Indian residential schools, and centuries more, Canada had enacted genocide and created, fostered and promoted apartheid against Aboriginal people.

How do one apologize for a 150 years and more of Indian Residential Schools?

Can anyone apologize for the time and the memories and the love that are lost?

Some have said, “That’s in the past. Why can’t you just get over it?”

Is it really in that past?

I asked a few people I know if their parents went to residential school, and if his / her parent’s ever hugged them. For everyone who had a parent or parents who survived, the answer to the second question was, “No”. Their childhood memories did not include the words, “I love you.” They could not remember being hugged by the parent who was a survivor. One said her mother never picked up any of her children. “She just couldn’t bring herself to do it,” she said.

Is it in the past for the survivors that have tears in their eyes when they see their number, the number they were given when they arrived at the school? For the fear that exists in so many people to speak their voice? For the shame so many First Nations, Inuit and Métis people have of just being themselves? For the loss of culture and traditions and language? For the generations of parents who could never hug their child or tell them they loved them? For the physical and sexual abuse suffered by children and relatives of survivors who themselves were child victims? For the parents who are afraid their children might grow up to be like them? For the highest rates in the country by Aboriginals of unemployment, diabetes, suicide, and incarceration?

These are the things that are “not easy” for Aboriginal people to “just get over”. These are the legacies of the Indian Residential Schools, of Canada’s policies and acts of genocide and apartheid of the first Nations and peoples of these lands.

Will this apology change the view of Canadians, and immigrants, and visitors that look at the people in Vancouver’s downtown east side who only see drunken Indians, but fail to see the more than 60 percent non-Aboriginal people high, drunk and homeless and the non-Aboriginal people who come into the neighbourhood to buy their drugs? Will it change the way people describe Aboriginal peoples – lazy, alcoholic, savage, squaw? Or the employers who overlook the largest and fastest growing labour pool in Canada? Or the police and justice system that turn out Aboriginal people into the glacial cold, improperly clothed and drunk in the dead of night and winter, or gun them down and then sell souvenir coffee mugs and shirts celebrating the occasion (Dudley George at Ipperwash, Ontario)? Or the perspective of the teacher who says, “They’re (Indians) naturally disadvantaged”?

These misguided and ill-informed ideas need to change.

David Israelson, a media relations expert in Toronto and former national newspaper journalist said, “From the non-Aboriginal side, the apology is important because it gets people talking about the crimes and their enormity. A lot of people in Toronto are new to Canada so they have no idea of this history, and it’s important that we all understand that it happened. That’s the beginning of wisdom. Maybe then we can start figuring out what it means and what to do about it.”

There is so very much for Canada to apologize for, and it should not matter that this was in the past to them for it is not in the past for the 80,000 survivors or their children and grandchildren, brothers and sisters, who are the inter-generational survivors. Canada and its people and corporations have benefited from the resources, and has promoted in the classroom and outside, stereotypes and racism and discrimination. And true in recent years and decades, policies continue to operate and be created to oppress or specifically target First Nations, Inuit and Métis peoples. Within these periods, Harper and his party have been in office and in opposition. Surely a person who deserves to lead this country would have the wisdom, the fortitude and the ability to influence and guide others to do right.

The Indian Residential School lives on today, and it is not confined to the Aboriginal community. It exists in those people who deny this occurred or that it is should just be ‘gotten over’, and those who write of a glorious Canadian history. Alex Haley said, “History is written by the winners.” Yet, this country was not acquired through war, guns and bullets, at least not through traditional forms of war. Dick Gregory, a 1960s African-American comedian, civil rights activist and US Presidential candidate said, “We used to root for the Indians against the cavalry, because we didn’t think it was fair in the history books that when the cavalry won it was a great victory, and when the Indians won it was a massacre.”

Yes, Canada’s written history is without shame, and is seasoned with denial. It is a history tainted with actions of genocide and apartheid against the first peoples of these lands.

Were these policies really genocide? Were they really apartheid? These are two strong words that have caused the world’s power countries to tip-toe around supporting international and United Nations declarations to define them as crimes against humanity.

Apartheid is a term from Afrikaans meaning “apartness”, being the official name for racial segregation in South Africa, and “more generally refers to racially based policies in any state”… not just South Africa. Apartheid actions are calculated measures including legislation designed to prevent “a racial group or groups from participation in the political, social, economic and cultural life of the country and the deliberate creation of conditions preventing the full development of such a group or groups, in particular by denying to members of a racial group basic human rights and freedoms…”

Genocide is from the Greek word “genos” (race), and Latin “–cide” (killing), defined in the late 1940s as, “the destruction of a nation or of an ethnic group.” Under International Law it includes acts “…committed with the intent to destroy, in whole or in part, a national, ethnical, racial or religious group…” including, “… forcibly transferring children of the group to another group.” There is no requirement that the action succeeds, and the term does not require these acts occur within a specified period of time, like a decade or a few months. Canada’s Indian genocide was centuries.

For those born and educated in Canada, and new to Canada, society and the school system has failed to educate on Canada’s dark history. New immigrants applying for work and living visas, and those vying for Canadian citizenship should be mandated to take First Nations cultural education courses developed and delivered by First Nations as a requirement to approval. All school children should be required to attend historical sites of Canada’s dark history, like Indian residential schools and historical sites of Indian massacre, as are the children in Germany required to visit concentration camps of the Holocaust. This goes for all Members of Parliament and Legislative Assembly.

It is time those missing pieces of Canada’s history are found, because “Each time history repeats itself, the price goes up.” (Author unknown) Those gaps are to be filled by the survivors who tell their histories to the Indian Residential Schools Truth and Reconciliation Commission, for “A nation that forgets its past can function no better than an individual with amnesia.” (David McCullough)

An African proverb reminds us that “Until lions have their historians, tales of the hunt shall always glorify the hunters.”